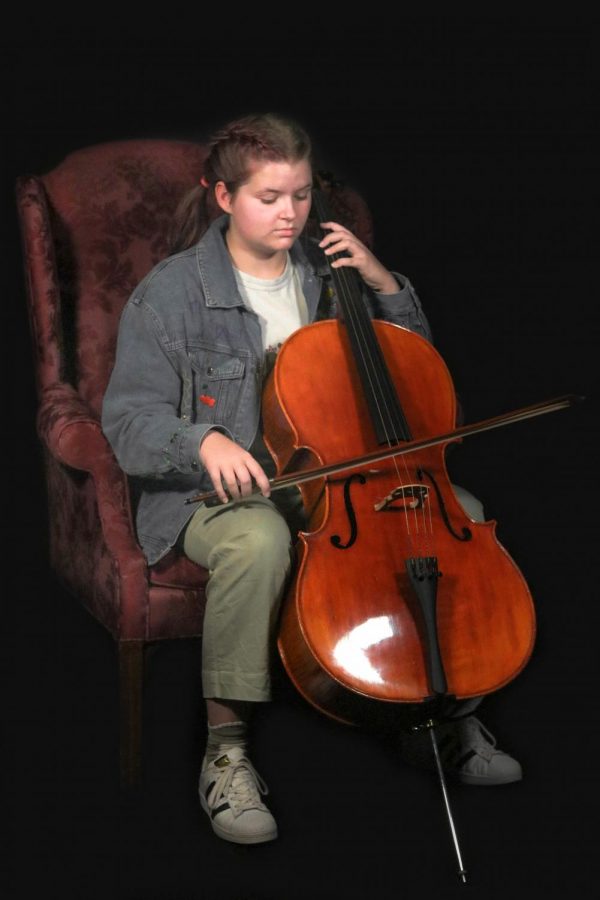 Not many people can say they have a hobby they’re passionate about. For senior Emily Verhagen, playing cello started as a fun activity, but it became something they love and hope to turn into a career as a music educator.

And as Verhagen grew more invested in music, they also faced many mental health struggles that they’ve been able to work through. The journey began shortly before sixth grade. For rising sixth graders, there is an event called “meet the instrument night” where they can try out all the different instruments the school offers. Verhagen’s mother forced them to go, which was the start to their career as a cellist.

“My mom was like ‘You need to do something’,” Verhagan said. “I didn’t mean to stumble upon this thing, but I did. I’m good at it, so I enjoy doing it.”

They then started playing the instrument at 11 years old, the summer before their sixth grade year to get a head start.

“I was the only one in the house to play a musical instrument at the time,” they said. “It was cool to have something unique to me that I liked doing, and that I would continue to get better and better [at].”

As they moved into seventh and eighth grade, they made it into the varsity orchestra in their middle school. As their skills improved, they gained more confidence as a player.

“In seventh grade, the first good time I had was when we did our first chair test,” Verhagen said, “and I was like ‘Oh. I’m not in the back of the section? I’m second chair? Ok go me!’”

They spent seventh grade working on getting comfortable playing with an orchestra after coming from a beginner class. In eighth grade, they became principal cellist and led the cello section.

“In 8th grade, it was [my] desire to be at the top and get ready for high school,” Verhagen said.

While just starting their career in cello, Verhagen also began to see changes in their overall mental wellbeing. In seventh grade, they said they started to feel depressed and told their parents.

“My parents didn’t believe that mental health was an actual struggle yet,” they said. “I remember going to my mom and saying hey I think I’m depressed and she said ‘Oh no I don’t think so, I think you’re just going through a rough time.’”

Verhagen didn’t feel depressed continuously and described it to be more of an up and down occurrence throughout middle school. From the way their parents reacted to them reaching out for help, this had a negative impact on the way that they would begin to cope with their mental health going forward.

“For the longest time in middle school, I would downplay my own mental health [thinking], ‘Oh I’m just going through a phase. I’ll get better in a month,’” Verhagen said.

Although they struggled with depression during this time, music wasn’t a source of stress. They were so much more advanced than the other students, so the class was something that came much easier to them. But it wasn’t until their transition to high school where they experienced a major life change.

“I was never really stressed about orchestra until maybe freshman year,” Verhagen said. “It was a very abrupt change that I didn’t expect. In middle school I was always the top dog, first stand [and I] always knew exactly what I was doing. Nothing was really challenging. I came to high school and it was challenging. Everyone had the same talent as me; I was kinda in the middle. It was weird to be challenged by music in class and I was like, ‘OK, I actually have to go home practice this.’”

They found that their mental health worsened during high school from all of the stress of extracurriculars and advanced courses, especially during the spring season. AP classes were a large stressor because of the end of year exams that come with each of those courses. “[I constantly was] feeling like I’m never going to have a moment to chill because I’m always doing homework,” Verhagen said. “A lot of things were picking up and my stress level did start to rise a lot. I feel like that is when things started to get worse.”

Over time, Emily found ways to live with their stress and handle the workload of high school. They cope by getting work done on the weekends and using other strategies to avoid a heavy workload on a particular day. So far, those changes are helping reduce stress.

“I haven’t really overcome it,” they said. “I’ve just gotten used to it being there.”

With college right around the corner, they are now preparing for auditions to get into a music school in Texas. They struggle with performance anxiety, so this has been a challenge to complete. “​​I can play the [pieces] at home perfectly,” Verhagen said. “It’ll sound so good, but once I have to actually play in front of people, that’s when my heart starts to race and everything will kinda shut down. My hand will start [shaking] and everything doesn’t work anymore.”

Because of their performance anxiety, they have found that they constantly psyche themself out of doing things like competitions, auditions and festivals.

“I was too much of a wimp to do summer camps,” Verhagen said. “I almost did the [Honors Performance Series] program to go to Carnegie Hall, but I just never committed. In situations like that I always downplay my talent. I know I’m a talented person and I’m good at it, but in those situations [there are] a lot of other really good musicians there, so I was like ‘Ok I’m not good enough for that.’”

Verhagen decided that they want to become an orchestra director because it was something that they are good at and they want to have an impact on the future of music students.

Throughout their time as a musician, Verhagen has been able to learn a lot about themselves and how to better help their mental health for the future.

“Don’t let anyone else tell you how to feel and how not to feel,” they said. “You know yourself better than anyone else knows you. If you think something’s wrong, then it most likely is.”